I spend a lot of my time wandering by the lake at the University of York, as I’ve discussed before. One of my favourite birds to watch there has been the Great-Crested Grebe.

This regular visiting has allowed me to make the sort of study I don’t normally get to do outside of garden birds, and I’ve picked up several things I’d not known before.

Grebes build an anchored, but essentially free-floating, nest. This helps protect them against water levels. The male and female take turns on the nest, incubating the eggs, which are rarely left uncovered. While on eggs they are feeding themselves, but once the chicks hatch it’s to feed the young. The newly hatched chicks initially sit tucked into the feathers on Mum’s back, while Dad does the hard work catching fish and passing it on.

What I hadn’t realised before was how soon they are back on the nest for a second brood. Almost as soon as the first chick (they had one survivor of a clutch of three) was vaguely independent, the female was back on the nest while the male focused on raising that single chick. And, as before, they shared those duties. 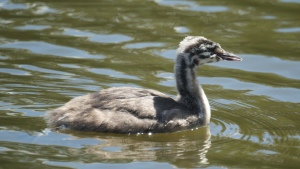 Now they have a further three chicks (I thought it was just two till I studied my pics), plus the older chick still demanding food.

It was while watching these chicks that I picked up on something I had never noticed before. All four chicks had a small, triangular red mark on their crown. A bare patch of bright red skin.

I hope it’s clear on those pictures.

So, what is this? A deformity? Some parasite? A magical third eye? A literature search was required. Wading through various papers there were lots of theories. The patch was natural, and present in nearly all grebe chicks. Some thought it helped control the chicks temperature while tucked on the parent’s back. Some thought it deterred predators. Others thought it was used in signalling parents.

It took a 1985 paper by Gary Nuechterlein to settle it. Hand-rearing some Western Grebe chicks, he used a series of experiments to determine that it was allied to begging for food. The more the bird begged, the brighter red the crown patch. Once fed, it faded to a lighter pink.

There we have it. Next time you spot grebe chicks, keep an eye out for the red patch!

This entry was posted in Biology, Birds, Ethology. Bookmark the permalink.

10 Responses to Great Crested Grebes and the ‘red spot’

I welcome thoughts, comments and questions, so please feel free to share anything at all. Thanks, David Cancel reply

This site uses Akismet to reduce spam. Learn how your comment data is processed.