Last week I added a few new plants to the pond. I’ve been doing this on and off over the spring/summer since completing work.

The aim this time was to add two types of thing. One, was to add a native lily to add more shade to the middle of the pond. The other, was to add some additional marsh marigold and bugle around the margins to give more cover, particularly to encourage amphibians such as frogs.

To really make this work, I started moving some of the stones at the edge to bed the marsh marigolds into some crevices. After planting the first one in, I spotted movement. Something had appeared between the stones.

I was doing this work to encourage amphibians, but I never expected it to work so quickly! I’d not seen one since the start of June, so to find one living in there was a real surprise.

Even better soon followed. While planting the next marigold, I spotted another frog.

Maybe that was the same one, and it had moved around very quickly? Or maybe not.

So there at least two resident frogs at the moment. It could be three, I can’t be sure the frog at the bottom is the same one I saw first, even though it did move after I (accidently) disturbed it.

Frogs weren’t the only cool wildlife. there were several semaphore flies doing a brilliant wing-flicking courtship display too. The flick their wings, highlighting the white tips, like a flag semaphore operator on an aircraft carrier. 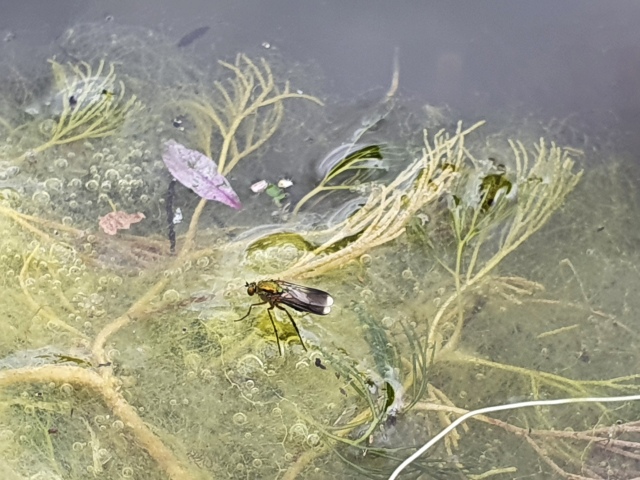 Here is the pond as it stands right now. Hopefully you can spot the changes.

It’s brilliant that starlings do well where I live, and as annoying as their constant calling can be, it’s great that I get to see so many. But every now and again, I’m reminded they are part of a broader ecosystem.

While making a cup of tea I heard alarm calls turn to a proper screech and knew a predator had something. I ran to the window and saw a shape hurtle past toward the patio. Looking out, I spotted the source of the cries.

The size, paler colour, and terrifying yellow eye tells us this is a female sparrowhawk. She’s grabbed one of the bay starlings and is now waiting for it to die. You can see the starling in the image below.

I also managed to grab a very quick video. The hawk wasn’t that bothered that I was watching. The video shows a clearly alive fledgling starling that is having the life squeezed out of it, so if you are upset by that sort of thing please don’t watch it.

I find female sparrowhawks quite scary. I’ve had plenty of birds of prey close up, staring back at me. Yet despite eagles and buzzards being much bigger, the sparrowhawk is the only one where I ever think it’s genuinely considering killing me!

I mentioned a few days ago that one of the moths released from the trap was almost immediately caught and fed to a hungry blackbird fledgling. So it’s worth briefly saying more about them. END_OF_DOCUMENT_TOKEN_TO_BE_REPLACED

Yesterday I posted about the moths that were caught in the moth trap. But it’s not just moths attracted by the light that then settle into the nooks and crannies of the trap. END_OF_DOCUMENT_TOKEN_TO_BE_REPLACED

Last week I had my first ever attempt at moth trapping. It was great fun, and I learned a lot for next time. But I thought I’d share a few of the moths seen. END_OF_DOCUMENT_TOKEN_TO_BE_REPLACED

I also had the trail cam out on the Great Yorkshire Creature Count, and got nearly 100 videos of hedgehogs. But had to share this little sequence of three 30 second videos. END_OF_DOCUMENT_TOKEN_TO_BE_REPLACED

Vultures in the UK

Bit of a departure from my normal posts here, as this is more of an essay with less pictures. Hopefully it’ll be interesting though. Over the weekend, I found myself sucked into a question as to whether vultures could live in the UK, and indeed had ever lived in the UK. We’ll start with the latter question.

END_OF_DOCUMENT_TOKEN_TO_BE_REPLACED

The weekend of the 20th and 21st of June was the first ever Great Yorkshire Creature Count. 718 people took part, making over 13,000 observations and recording 1,448 different species, which is amazing. END_OF_DOCUMENT_TOKEN_TO_BE_REPLACED

This weekend sees the first ever ‘Great Yorkshire Creature Count’, run collaboratively between Yorkshire Wildlife Trust, and Sheffield and Rotherham Wildlife Trust. If you are in Yorkshire, I’d encourage you to take part. END_OF_DOCUMENT_TOKEN_TO_BE_REPLACED

So it’s been a while since the last update and I thought it’d maybe be interesting to see what’s been happening.